Billed as one of the best guitar players of Turkey, he released 2 solo albums consist of instrumental rock guitar tunes flavoured with authentic Turkish musical ideas and playing techniques. He also has been working with popular artists and bands as a producer and engineer.

He started practicing music by playing the mandolin in primary school. As he met the electric guitar in high school years, he was involved into music with a serious dedication. He played concerts with the school band and participated in contests organized among high schools. He started to play his original compositions with his first band Exon, which was formed in the beginning of his university years. The band had the chance to record a song as the winner of a contest at 2 branches; “Best Hardrock Band” and “Best Heavymetal Band”. The band transformed into a funk-rock band because of the changes in the line-up and was named as Blue Line.

After he graduated electronics school of Bogazici University, he started working in Spectrum Recording Studio as a sound engineer. He had the chance to develop his skills on different recording techniques and worked in productions of various albums as an engineer and a studio musician. Meanwhile, he joined the Turkish rock band Kesmeseker and recorded the album “Ask ve Para” in Bogazici University’s Recording Studio. He left the band after the album and formed the most reputable cover band of Turkey; Indians, which they have played in top clubs for a long time. Setting up a home-studio, he started to pave a new path as a producer-arranger. In a short time, he had the chance to work with Turkey’s top rock stars (Teoman, Haluk Levent, Murat Evgin, Rojin, etc.) and became a well known producer and guitarist.

In summer of 2002, he released his first solo and Turkey’s first instrumental rock album; “Sukut(Silence)”. After a short while, he joined the famous rock band Bulutsuzluk Ozlemi. He played many gigs around Turkey and Europe with the band and recorded a live album with a symphony orchestra named Bulutsuzluk Senfoni. Meanwhile with his album Sukut, he had positive feedback all around the world and was chosen as an undiscovered artist by the famous guitar site www.guitar9.com. He played as the opening band for Glenn Hughes & Joe Lynn Turner Project in Istanbul. In the first quarter of 2005, he left the band to record his 2. album “Mutlulugun Gozyaslari(Tears of Happiness)” and to concentrate on his solo projects.

Releasing his new album, in which the most successful drummers and bassists performed on each song, on September, 2005, he started touring around Turkey for concerts and workshops. He performed before world reknown guitarist Joe Satriani.

In 2007, he founded his new studio. And started instructing about recording techniques at  Modern Muzik Akademisi until he joined the band Kurtalan Ekspres in March 2013. He recorded, mixed and mastered the 2014 album of the band, GöğeSelam II,
in his studio and toured with the band all across the country until June 2014.

He was born in Istanbul. He has studied civil engineering and electronics in Bogazici University and received a masters degree in music in Istanbul Technical University Advanced Music Research Center (MIAM). 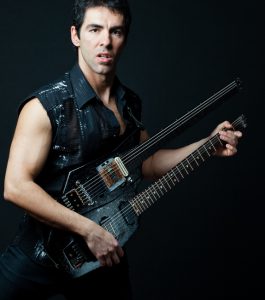